We were featured in the cover story for Sin Chew Daily print edition dated July 27, 2011. Our special thanks goes to Sin Chew Daily chief editor in CyberWorld section for the coverage.
In case if you missed the print edition, we have posted the digital copy of the news coverage below for your pleasure reading. 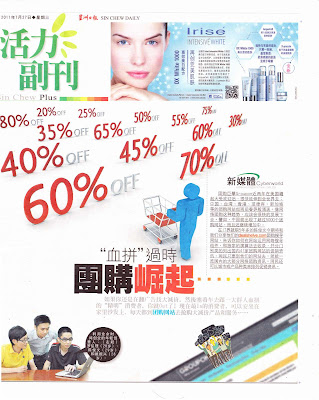 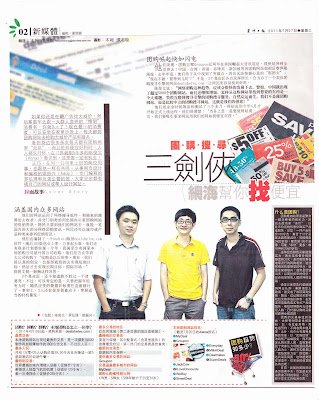 Earlier this week, we received a legal notice from the CEO of Groupon Singapore (formerly known as Beeconomic), stating that Dealshelve is displaying their deals in an "unauthorized" manner and legal action will be taken upon us if we do not remove their deals by Wednesday this week.
This bring us to an interesting question. Do daily deal aggregators like Dealshelve and Yipit have the legal right to display information extracted from daily deal sites? It is a common practice for daily deal aggregator to state the provider, i.e. source site, for all the deals that are listed. When a visitor is interested in a particular deal, there is usually a "find out more" button that will lead the visitor directly to the deal page on the source site itself.
Information collected by daily deal aggregator is readily published by daily deal sites on the Internet for public viewing. Anyone should be free to read or even share these deals. In fact, it is widely accepted that the key to success for daily deal website is to be able to broadcast their deals to as many people as possible in the shortest possible time. Most deals usually require minimum amount of buyers before they become available so sites, i.e. daily deal aggregators, that promote the deals can certainly help! Daily deal site that restricts sharing and publicity of their deals is unlikely to reach broader audience than they would have otherwise and most probably they also can't provide cheaper deals for the lack of mass buyers.
If referring and sharing information from other sites is illegal, how should we view the search results from Google or Yahoo? Should they be removed as well? If restriction in sharing becomes a trend, what can we get from the Internet as a whole? One of our principles is to be able to serve our users with deals from as many daily deal sites as possible so that they get to choose the one that they like the most. In this view, we humbly hope Groupon Singapore will be able to reconsider their request and withdraw the legal action against Dealshelve.
The original email.
See also views on this matter at other news sites:
Posted by Kenaz at 3:51 AM 6 comments:

Group buying is a relatively new concept on the internet and many people are purchasing for the first time. I would like to share a few tips to fellow group buyers wannabe because buying deals online does not always give you a happy ending.

Here are a few simple tips from Dealshelve:

Do you have more specific tips on group buying? Please leave a comment or send an email to info@dealshelve.com. Happy group buying!

Posted by honglee at 8:41 AM No comments: